In the exhibition „Cooling Out – On the paradox of feminism“, 2006
Kunsthaus Baselland
other venues were: Halle für Kunst Lüneburg and The Lewis Glucksman Gallery, Cork

.
.
The conceptual work of the Hamburg artist Katrin Mayer revolves around themes like the feminist actions of Niki de Saint Phalle in the 1960s, images of women in the 1950s, pop culture and glamour, modernist forms and functional mechanisms in the field of art. Through in-depth research she develops scenarios in close proximity to architectural spaces, creating shifting contexts of meaning. When selecting the material she intends to work with, she realizes that new life may be breathed into (historic) objects by way of repetition, recontextualisation, and memories, thus possibly bringing about shifts in their meaning. Through this meaningful and formal incorporation into other referential systems, Mayer reevaluates a distinctly feminist approach. She traces analogies and connections between various spheres of meaning.

For Cooling Out Katrin Mayer developed a wall piece that loosely interweaves the following three motifs: Shooting women like Niki de Saint Phalle and Modesty Blaise, who fought within the male domains painting and killing. Stripes in their connotation of being used as a visual sign for marginalization, like prostitutes in the middle ages who had to wear stripes. And, third, the dancing battles called Krumping or Clowning in South Central, L.A, that gained huge attention through the film "Rize" (2005) by David LaChapelle. All three motifs are dealing with the urge of demanding visibility at the margins. Like a continuing iconological field, Mayer inscribes them as pasted layers into the exhibition space. 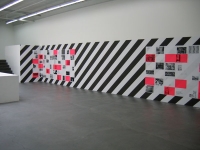 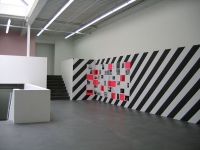 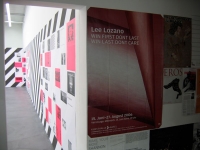 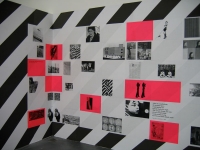 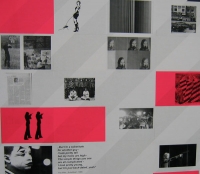 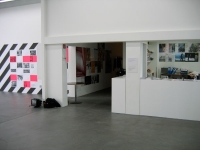